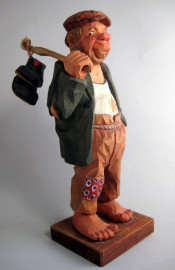 Carl Johan Trygg (1887-1954) was one of the recognized masters of twentieth century woodcarving, most famous for Scandinavian flat-plane style of woodcarving.  Between C.J.Trygg and his three sons they carved over 10,000 figures.  Many of his carvings were sold to tourists for approximately $10.00 USD.  Adjusted for inflation what cost $10.00 in 1929 would cost $108.05 in 2005.  They were not known to use sandpaper when woodcarving the piece.  They used two finishing nails to fasten the carving to the base.

Trygg family wood carvings are still sought after today as collectibles. There are over 10,000 carved figures that were manufactured by the members of the Trygg family. Prices range from $50 to $500 depending upon the age, size, and condition of the piece.