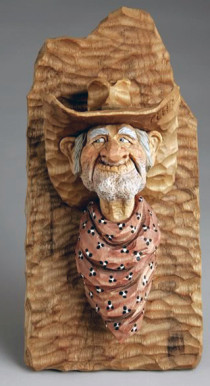 After 30 years teaching troubled kids in an alternative high school, Gary retired 5 years ago to pursue the hobby he loved. He has been a carver for 30 years and has taught for the last 15 years. He teaches regularly in south Florida and many other locations in the Southeastern United States. Gary also teaches at the Woodcraft Supply in Cincinnati and Johnson City. He gives classes in Richmond, as well as, John C. Campbell Folk School, Tennessee Valley Woodcarving School, Cadillac and Oscoda Michigan Rendezvous, and Renegade Round-up in Lebanon, TN.  He has taught as far west as Missouri and will be at the War Eagle Rendezvous.

Gary has been a consistent blue ribbon winner at the International Woodcarving Congress, Dayton Artistry in Wood Show, and his home show at Dollywood. Gary won a Second Best of Show at the first CCA National Caricature Competition at Branson in 2002 and was the Best of Show winner in the 2003 CCA competition at Dollywood.

Gary is a very versatile carver. Not only has he been a consistent winner in the whittling competition at Dollywood but also a regular winner in Dollywood’s Great Pumpkin Carving Competition. In addition, he demonstrated pumpkin carving at Dollywood’s Harvest Festival for five years. He has become nationally known and was a featured carver in the book “Carving Found Wood” and has also written two step-by-step articles,  “Pass the Bacon”, for Woodcarving Illustrated Magazine.

As a founding member and project leader in Tennessee Carvers Guild, Gary is always ready to bring a new project to the group. At their regular Monday night meetings, Gary can always be found helping his fellow carvers.